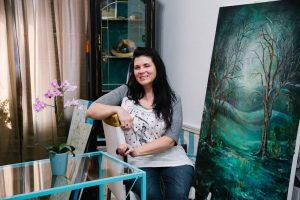 I’m meeting Lisa Dittrich’s neighbors, nearly all of which are in the process of creating. One is making a time-lapse video of a painting in progress. Another proudly informs us that she stretches her own canvases on premises. And Dittrich says that another artist in the building mixes his own pigments.

“We didn’t have anything like this growing up,” Dittrich says. “I moved out here in 1985. It would have been fantastic to have something like this back then.”

To be honest, I don’t often think about the Arts Factory outside of First Friday. I’ve taken it for granted, which I shouldn’t do, because Dittrich’s right; it wasn’t that long ago that this city didn’t have buildings full of artists creating art on weekdays. And Dittrich, a former volunteer at Gina Quaranto’s late, lamented Blackbird, had nowhere to show her work or the work of other developing artists she knew.

Now, in Random Alchemy—a gallery on the Arts Factory’s jam-packed second floor—Dittrich has that place. Its current show, the wonderfully gothy Dark Hearts Club 2017, features works by some artists I know and others I’m discovering anew. But more significantly, I’ve been reminded that the Arts Factory is not static. Great things are happening here daily, and when I suggest that it feels good to surround oneself with art in troubled times, she vigorously agrees: “Not just the art, but the artists and the people that come out that support you. It’s nurturing.”

Our tour is taking a toll on Dittrich, who suffers from an autoimmune disorder called Moersch-Woltman Syndrome; it will worsen, and eventually incapacitate her. It’s inspiring that Dittrich is devoting her remaining years of mobility to championing local artists. That says some powerfully good things about her neighbors—things that more potential art collectors should respond to.

“If you find a connection with locals, then they’re willing to start collecting you,” Dittrich says. It seems like an appropriate time to mention that the Arts Factory is probably open right now.